The Franklin Inn has seen many t-shirt designs over the past 33 years. None, however, has been quite as popular as our "Fill to this Line with Margaritas" tie dye.  How did this popular but simple concept come into being? Believe it or not a salad dressing mixer. It'll make sense soon....

Several years ago while cleaning his office; John came across a very old Franklin Inn t-shirt he had forgotten about. It said, "Fill to this Line with Margaritas."  He thought it would be fun to offer them again, so he asked me to create artwork for the printer.  I asked John where the idea originated. He guessed that either his mom or Aunt Noreen had created the tag line.

Upon further investigation, I found out that Aunt Noreen (who managed the Franklin Inn at one time) did indeed suggest it. Apparently, the inspiration was born from the process of measuring her homemade salad dressing in a bottle with lines for each ingredient. You know....oil to this line...vinegar to that line. She realized that the bartenders did the same thing when mixing up margaritas. They used the lines of the mason jar to guide them through the recipes. Ah ha! "A t-shirt with this concept would be great," she decided. Aunt Noreen was on to something. A simple but brilliant design."Fill to this Line with Margaritas."

The original "Fill to this Line With Margaritas" shirts were printed on solid colors. I suggested to John that we have them printed on tie dyes. Wow! It was a killer combination. They took off like wild fire and we've been offering them for several years now.  We can't keep them in stock. The staff and our patrons go crazy for them.

Folks are always asking me to call them or email them when we get this color or that size in. At first I tried to accommodate everyone's requests for colors and sizes, but honestly, I couldn't keep up with the requests. After all, I'm in the restaurant business....not the t-shirt business. Plus, there isn't much space at the Inn to hold shirts for pick up. I now order the most often requested colors and combinations and then offer them to our patrons on a first come, first served basis. 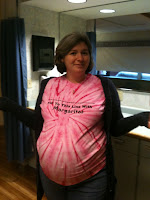 I have received photos of folks wearing them and heard stories of folks being recognized wearing them all over the country. John, himself, was stopped during a trip to OBX by another vacationer who recognized the shirt. He asked John if he also frequented the Franklin Inn in Pittsburgh (lol!).

This is my favorite patron provided tie-dye-wearing photo....maybe because I've given birth three times. I know there are other moms out there who can relate!  This is Terri about to give birth in the labor and delivery room!!! Btw, Terri owns a great business called Beyond the Office. Look her up. I have to give her a plug for her willingness to send me a photograph at this particular time! Don't you think she'd be fun to work with? I think she won this shirt by being the Mayor on Four Square. See! Make sure you check in. You never know.

These fun shirts are back in stock in the colors at the top of this page. These are real tie dyes that I have printed up locally by Touch of Grey Tees. If you have your heart set on a particular color or size, it is best if you don't delay your next visit to the Franklin Inn.

P.S. I'd love for you to send me a photograph of you wearing your Franklin Inn T-Shirt. Can you top Terri's locale?