History Repeats Itself at Fire & Ice Chili Cook Off. 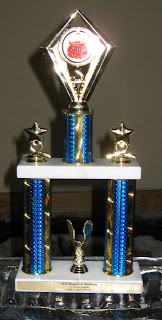 Several weeks ago I received a call from Denise, the Director of Development, at Anchor Point Counseling Center.  She explained that the Owners of the Shoppes at Northway had been so kind and hospitable to Anchor Point providing a nice space to store and sort books and a venue for the organization’s upcoming Used Book Sale (June 6-11).  They wanted, in turn, to support the Mall’s efforts, so Anchor Point reserved a table at Northway’s Third Annual Fire and Ice Chili Cook Off.   The problem was Anchor Point is not known for their chili (counseling, parenting workshops and tutoring-yes-but chili,nope). No recipe-confident volunteers amongst the staff stepped forward to make the chili for the competition.  So, Denise asked me if the Franklin Inn would bail them out and donate the Chili for the cook-off.


John and I decided to enter the competition with our Award Winning Aztec Chile.  We knew it would be a strong contender.  No one else has a chili like it. It’s spicy and features special ingredients like the smoky pasilla chile.  Sue Cibula (John’s mom) developed the recipe for the Inn’s popular Aztec Chile in response to an invitation to a local Chile Cook off about 20 years ago. “I thought that we ought to be able to come up with something better than the other submissions since we were a Mexican Restaurant,” she explained.   Sue and then manager, Aunt Noreen, entered the recipe in the Chile Cook off. It won over the taste buds of the judges and took first place.  The Aztec Chile was then added to the Franklin Inn’s menu and customers have been enjoying it ever since.


Our kitchen manager, Karen, cooked several gallons of this amazing chili for the Fire & Ice Chile Cook Off last Saturday Night and off John and I went.  The event was great fun. We were excited and flattered by the numerous return visitors to the Anchor Point table featuring the Franklin Inn’s Aztec Chile. Taster after Taster told us that our chili was the best.  The event had a better than anticipated turnout. Our Chile actually ran out way before it was over…and history repeated itself! We won the Chile Cook Off. Two decades after its first award the Aztec Chile is still a tasty winner.  Thank you to Anchor Point for choosing the Inn’s Chili to enter into the competition giving us the opportunity to prove once again that the Inn’s approach of simple fresh Mexican food made with good ingredients stands the test of time.  Join us at the Inn today for a bowl of Sue Cibula’s Award Winning Aztec Chile and taste it for yourself.
Posted by Franklin Inn Mexican Retaurant at 10:15 PM No comments: