This Weekend at the Inn....

Enjoy one of these Special Features this Friday & Saturday or one of your Franklin Inn menu favorites.
* Mexican Wedding Soup 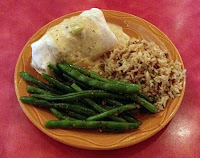 Steak Burrito
We’ve had requests for our popular steak burrito to be served before Lent. So, here it is for you. Char-grilled Steak and a creamy pimiento cheese sauce made with Monterey Jack in a flour tortilla. Served with stir fry green beans, of course! 12.95 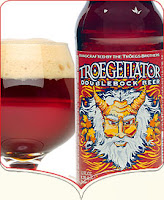 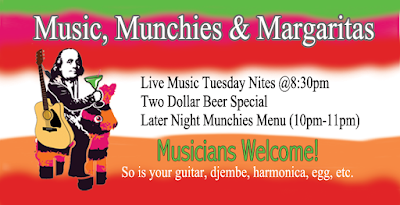 Posted by Franklin Inn Mexican Retaurant at 1:14 PM No comments:

After a few visits on our tap, Railbenders made its final trip around the Franklin Inn Draft beer track last night. Farewell Railbender Ale. We enjoyed your visit. Now it's time to meet Troegenator... 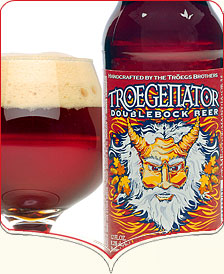 Located in Hershey, PA, Troegs Brewing Company brings us the Troegnator Double Bock. Apparently, they will only distribute their beer within a three hour driving radius which makes us lucky ducks to be within their range! Check out their super cool artwork at their website (www.troegs.com) too. Their beer labels are great.

The brewery's description: "Troegenator Double Bock, is a dark, strong lager (8.2% abv). It pours into a glass with a bronze to brown color, fluffy white head and bready malt aroma. The Troegenator leaves a rich, warming feeling and subtle spicy flavors. The style, Double Bock, dates back a century or so ago. During periods of fasting without solid foods, the Monastic brewers relied on the double bock; a stronger, richer beer to fulfill their basic nutritional needs. Known to them as "liquid bread," a double bock has a strong malt aroma and chewy rich body. Traditionally these brewers ended the name of their double bock with the suffix "ator", ex. Celabrator, Illuminator, Subliminator... In the spirit of the tradition we give you the Troegenator."

RateBeer gives Troegenator an overall score of 94 and Beer Advocate seems to be split with an 87 and 94. Upon further "googling" of  Troegneator, I found that most reviewers gave it scores in the above average and excellent range. Despite the high alcohol content, most also agreed it was a smooth and pleasant beer and would choose it again.

Before completing this blog post, I made my hubby, John, pour himself a draft and have a drink. I know, I know....his life his tough with a slave-driving wife like me! He says that upon his first sip he could tell it is a well made beer.  According to John, "It's very tasty with a creamy head and bit of a hop bite but not bitter. It is delicious."

"Meat" and non-chocolate desserts or toffee are the suggested compliments to Troegenator. So, try it with a hearty steak fajitas or chorizo burrito. Follow that with our Sopaipillas. And, it just so happens that we have a delicious Warm Dulche De Leche Toffee Cake feature right now too!


Come on in and try a Troegenator today. Sounds like it is a great cold weather beer. Let us know what you think of it.


Posted by Franklin Inn Mexican Retaurant at 11:47 AM No comments: