The most interesting man in the world was at the Franklin Inn for dinner and margaritas the other day. He was excited to hear that we are featuring live music on Tuesday nights. He thought it was a great idea, however, he pointed out that Dos Equis Special Lager hadn't yet been featured on $2 Tuesday. We thought we should go with his suggestion because he doesn't always drink beer, but when he does, it is Dos Equis. Since the most interesting and intriguing individuals enjoy Dos Equis (and frequent the Franklin Inn), we know you will enjoy this beer too.  Bottles are just $2 all day today. 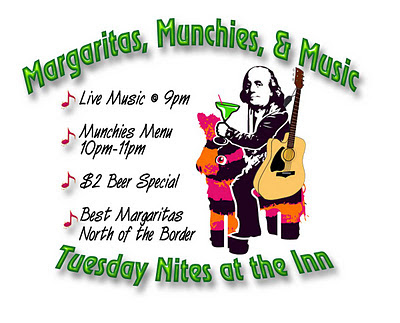 Posted by Franklin Inn Mexican Retaurant at 11:53 AM No comments: Links to this post 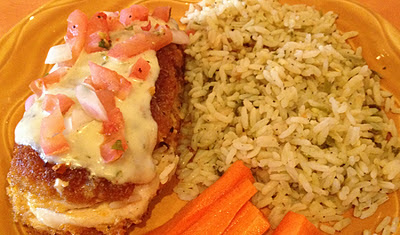 We challenged one of our lead cooks, Phil Poelcher, with creating his first weekend feature for the Franklin Inn. We already knew that Phil is a great cook. He's in our kitchen most nights so many of the meals you've enjoyed have been prepared by him. Phil also has 15 years of additional cooking experience in the restaurant industry apart from the Franklin Inn. So, we thought it was time for him to give it a shot. Well, Phil came through big time! Wait until you taste his Chorizo Stuffed Chicken Breast. I ate the one in the photo here and it was great! Phil is very excited to prepare it for you tonight. Come on out and try it and let Phil know what you think. Please send him a little encouragement here or via a post on our Facebook page or a tweet. He'll be thrilled to read your comments.

The rest of the gang has been busy as well. Join us this weekend for your Franklin Inn Menu Favorites or these yummy specials features:

Well....you really like the Dale's Pale Ale. We sold out of that one in record time! Don't worry. We'll try to get it back asap. In the interim, we're chugging down the the specialty and craft beer path. Next stop: Erie Brewing Company's flagship beer, Railbender Ale. This multi-award winning Scottish Ale features "a deep malt flavor, caramel sweetness lingering in a soft hop flavor." It is considered a Dark Amber.

According to the the company, Erie, Pennsylvania was an important railroad hub in the mid–nineteenth century because the city was the site where three sets of track gauges met. Railbender Ale is named after the laborers who laid the railroad tracks. Railbender is brewed with the "pride, strength and purity symbolic of Erie’s historic railroad’s and railroad workers." The company also says that Railbender's "smooth malt flavor and astonishing drinkability will have you Hopping on the train and riding off the rails. All Aboard!"

Among the food pairings that Erie Brewing Company suggests with Railbender are roasted meats or sausages. Try a Chorizo burrito made with our homemade Mexican Hot Sausage or Shredded Beef Enchiladas which feature our delicious slow cooked beef. Our weekend special Carne Picante offers delicious tender chucks of chuck roast. Other reviewers suggest grilled meats. Go for our chicken and steak fajitas or a char-grilled Mexican Burger.


Most reviewers agree that this is a pleasant, smooth, and drinkable beer. Stop over at the Franklin Inn and give it try. Let us know what you think of this one and how you rate it among the others we've featured recently.

Posted by Franklin Inn Mexican Retaurant at 3:48 PM No comments: Links to this post 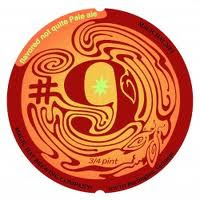 Due to it's popularity we've decided to go another round with Magic Hat #9. This Tuesday you can take a "taste" drive of this fruity number for only $2.


That's right! 16 ounce Magic Hat Drafts
will be $2 all day on Tuesday.

Since spicy dishes are suggested among the best food pairing for Magic Hat #9, you'll be able to get the full experience at the Franklin Inn Mexican Restaurant. Try your #9 with a chorizo burrito or an order of wings (we only have one kind: Hot!). Make sure to tell your server you want the extra hot salsa too.

The brewer's description of #9: "Not Quite Pale Ale. A beer cloaked in secrecy. An ale whose mysterious and unusual palate will swirl across your tongue and ask more questions than it answers. A sort of dry, crisp, refreshing, "not-quite pale ale. #9 is really impossible to describe because there’s never been anything else quite like it."

Here are there stats (I'm not sure what all this means but I know some of you do!):

Magic Hat claims that #9 features a secret ingredient that "introduces a most unusual aroma which is balanced with residual sweetness." Many experts think the secret ingredient it is apricot. GotBeer.com says, "No. 9 does have a fruit-forward profile, but it doesn't exactly scream apricot. The flavor comes close to peach tea with a lemony tang."  What do you think? Can you identify Magic Hat #9's mysterious ingredient? Come taste it at the Franklin Inn and let us know what flavors you taste.

Posted by Franklin Inn Mexican Retaurant at 5:47 PM No comments: Links to this post

Dale's Pale Ale Has Arrived at the Inn...

Well....you finished off the Smuttynose in record time, so we had to replace it with something else great. After receiving quite a few positive recommendations, John decided to give Dale's Pale Ale a try. He thinks you will enjoy it too, so we've got it for you in the infamous can or on tap for a limited time.

According to their website, the brewery began hand-canning Dale’s Pale Ale on a table-top machine that sealed just one can at a time. This made Oskar Blues the first US craft brewer to brew and can its own beer.  “We thought the idea of our big, luscious pale ale in a can was hilarious,” recalls founder Dale Katechis. “And it made our beer immensely portable for outdoor enjoyment fun.”

Visit the Inn and taste Dale's Pale Ale for yourself via a can or a draft. Let us know what you think.What's your suggestion for the next draft beer on tap at the Inn?
Posted by Franklin Inn Mexican Retaurant at 6:35 PM No comments: Links to this post