Smuttynose Going on Tap at the Inn

It's on the truck and should arrive any minute:
Smuttynose Robust Porter!

Forgive the name. It sounds a little unappetizing at first but apparently it is the name of one of the islands off the coast of New Hampshire. The cute little guy in Smuttynose Brewing Company logo is one of the inhabitants of the island. Anyway, we'll be putting their Robust Porter on tap later today. Have you tried it yet?

Here is the brewer's description,"This hearty, mahogany colored ale is brewed to evoke the dark, full-bodied ales that were a favorite of dockworkers and warehousemen (hence the name “Porter”) in 19th century London. It is a good bet that when Dickens’ Mr. Pickwick sat down for a pint, we would have been drinking an ale much like our Robust Porter.This is a smooth and very drinkable beer, characterized by its well-balanced malt and hops, plus subtle notes of coffee and chocolate."
And GreatBrewers.com says, "This hearty porter is a great accompaniment to a wide array of Mexican dishes, burgers, steaks, sausages, ham, smoky flavors and chocolate desserts." I'd say this makes Robust Porter perfect for patrons of the Franklin Inn. 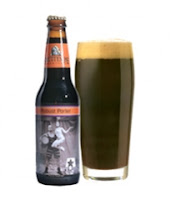 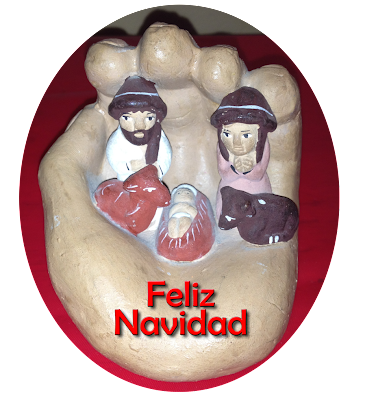 Posted by Franklin Inn Mexican Retaurant at 11:55 AM No comments: Links to this post

What the Heck is a Cactus Pear?

These charming models are a pair of Cactus Pears (also referred to as prickly pears or tuna ). I had heard of Cactus Pear and seen it on ingredient lists but I had never encountered a Cactus Pear up close and personal in the raw form until today. I had to take a photo to share with you. What a beautiful fruit. Just look at the gorgeous color inside.

Chef Dale ordered these to make a sauce to accompany a chocolate lava cake he is baking for a dessert feature. He explained that these "pears" grow off the paddles of the cactus. His plan was to combine cactus pear with papaya for a dessert "drizzle".  As I admired this fruit, he explained that he would scoop out the flesh and strain the seeds. Just then another cook, Leo, asked us to hand him one. Leo pulled the skin off (without gloves....they don't call them prickly for nothing) and popped the whole thing in his mouth, seeds and all. So, I shrugged my shoulders and turned to Chef Dale who promptly skinned and cut me a piece which I popped in my mouth the same way, seeds and all. Yum! It tasted like a cross between a really ripe sweet watermelon and a pomegranate. Others have described it as a non acidic kiwi.  The seeds were edible but pretty hard...not as hard as watermelon seeds but I still think it was wise of Dale to remove the seeds for the dessert sauce.

Intrigued by this beautiful and sweet "fruit" I went online to check out more about the cactus pear. They call it "tuna" in Mexico. I read that it has been used for thousands of years in Mexico and around the world for medicinal purposes.  It is a rich source of mineral magnesium, taurine (an amino acid), vitamin C, calcium, potassium and antioxidants. This fruit is also low in calories and in sodium and no cholesterol or saturated fat. It's a good source of fiber similar to soluble fiber that has been shown to to "sop up" cholesterol. Research has been done using the prickly pear to help manage cholesterol levels. Other studies show it helps in treating diabetes, cancer and more! It even helps fight viral infections. All this from such a sweet and pretty looking food item.

I am always getting compliments on my fresh fruit salads at family gatherings. I'm thinking about adding the Cactus Pear to the bowl. What do you think? Have you tried Cactus Pear? Do you have a great recipe involving this wonder fruit? I'd love to hear about it. If you've never tasted one, now is your chance. Come to the Inn over the next couple days.


Posted by Franklin Inn Mexican Retaurant at 11:24 PM No comments: Links to this post

Starting to night we have an awesome line up of special features for you:

Dinner Feature
Walnut Encrusted Corvina with a Lemon Lime Cilantro Beurre Blanc Sauce. Corvina has a mild, sweet taste and is regarded as a prime table fish in South America. Served with Plantain Chips and Rice. 12.95 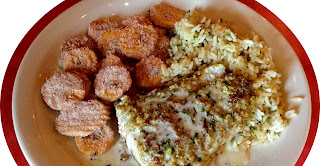 Posted by Franklin Inn Mexican Retaurant at 2:34 PM No comments: Links to this post 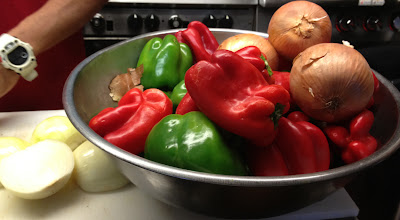 This beautiful bowl of veggies will be part of your fajita dinner at the Franklin Inn today.  I couldn't resist taking a photo when I saw this lovely bowl of  peppers and onions. Leo is chopping them up for you right now. 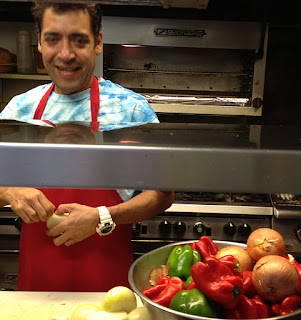 Texans like to claim the fajitas as their invention and historical credit is given to the Mexican Vaqueros (cowboys). However, I think fajitas are a true Mexi-American collaboration. Add the Franklin Inn twist to this recipe and you've got a delicious meal.

Vaqueros were ranch workers living on the border and working cattle roundups in Texas in the 1930s. When a steer was butchered, they were given the "throwaway"or least desirable cuts of meat as part of their pay.  This tough cut of beef is known as skirt steak. The Mexican term for grilled skirt steak is arracheras. The American term fajita comes from faja which translates into "belt" or "girdle". Fajitas jumped from the obscure camp fire scene to "on the scene" sometime in the late 60s according to the various accounts. The term fajita has morphed from its original meaning and is understood by  most folks today as anything cooked and rolled in a soft flour tortilla, or grilled up on a sizzling platter.

Food snobs turn their nose up at fajitas as being "Tex-Mex." I don't care who gets the credit for fajitas or how authentic they are because they are just good food at the Franklin Inn! And, I think, a healthy option. I can't really see fajitas being very high in calories as long as you portion control the guac and sour cream. There aren't that many ingredients involved. Fresh meat, veggies, a little oil, some garlic, salt, pepper (and hot sauce on the shrimp), etc.  I usually skip the tortilla myself but John eats them. 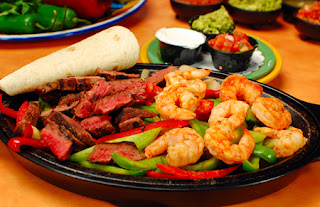 Traditionally, fajitas are made using skirt steak as mentioned above. But, it can be really tough even when marinaded for a long time. At the Franklin Inn, we actually use a quality sirloin for our steak fajitas. Therefore, we do not marinade our meat. You can also choose a fresh chicken breast, chorizo or spicy shrimp. And, for those abstaining from meat, our veggie fajita features portobellos and seasonal vegetables. If you can't decide, heck, get a combo fajita.  John and I sometimes order a combo fajita and split it. I always let him eat one or two of the shrimp. Beware...those shrimp are addicting.
Posted by Franklin Inn Mexican Retaurant at 5:33 PM No comments: Links to this post

What the Heck is Chayote?

My first experience with Chayote [chah-YOH-teh] was in Mexico.  John's parents were in the practice of renting a house in Mexico for a month at a time.  I'd get to tag along for the last week of this adventure (work schedule permitting). They'd also hire a Mexican cook or chef to come to the house and prepare meals for the duration. This was a great way to gain fresh insights into Mexican cooking, learn new techniques, recipes, brainstorm ideas, and of course, taste new foods. Rice was served with many of these meals. One cook made her rice with peas and diced veggies including chayote. At first I thought it was a green carrot. She had cut all the veggies to the same bite size shape and it had the same texture (due to being cooked in the rice). But, I was told it was "chayote."

Chayote is from the gourd family and is sometimes called Mexican Squash among other names. Apparently, it was first cultivated in Mexico and the Aztecs and Mayans ate it.  Like the tomato, chayote is actually a fruit.  It can be eaten raw and has a mild flavor.


According to Livingstrong.com the chayote  is "low in calories and chock-full of vitamins and other nutrients." A half cup has 11 calories and a couple grams of dietary fiber. It has no cholesterol or fat and is extremely low in sodium. Various sources have reported medicinal properties of chayote. A tea made from the leaves is used for lowing blood pressure, dissolving kidney stones and treating atherosclerosis (hardening of the arteries).

Have you used the chayote in your cooking? If so, I'd love to know how you prepared this popular Latin American vegetable (or fruit).

This weekend Chef Dale is including chayote in his vegetable medley along with yellow squash and zucchini. Come on out and give it a try.


Posted by Franklin Inn Mexican Retaurant at 4:50 PM No comments: Links to this post