Lavery's The Devil's Pumpkin Ale was just tapped at the Inn. It's formerly known as Stingy Jack Pumpkin Ale.  Apparently, the name was changed due to a disagreement with a winery with a similar name. Which ever name you recognize this pumpkin ale by, Lavery says that it was named after the Irish legend of the Jack O Lantern. It's brewed with Pumpkins and Spices. Subtle spicing ensures you can enjoy more than one pint per session. It's a drier version of your standard pumpkin ale, not "cloyingly" sweet. Lavery says that it has a nice toasty/biscuity flavor from American pale ale malt, slight hop bitterness from Northern Brewer and uses the Lavery house yeast blend that leaves slightly fruity esters. 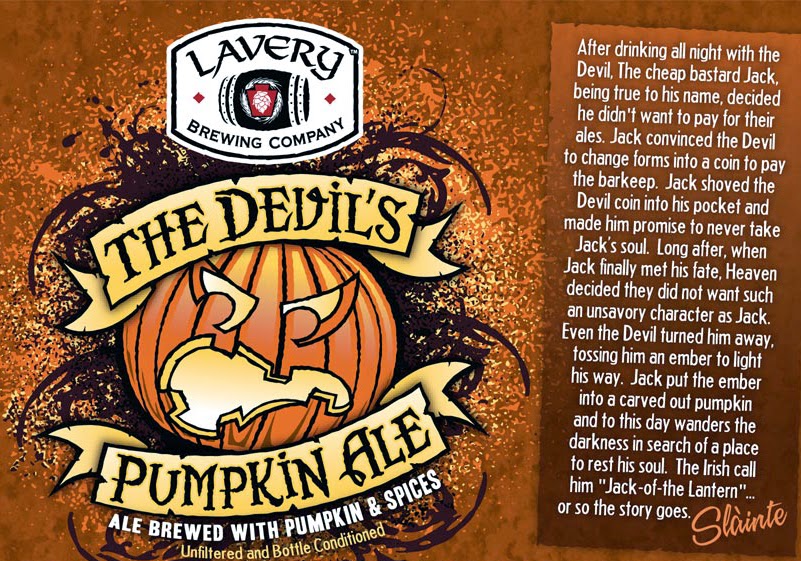 Lavery Brewery is an American craft brewery that "feels comfortable bouncing across brewing traditions and styles." They like traditional beers as much as they like extreme beers and try to walk a fine line between the two. They refer to themselves as a Pennsylvania-style craft brewery.

Lavery Brewing Company was founded in 2009 by husband and wife Jason & Nicole Lavery. Jason Lynch joined the brewing quest in 2010 to build their 10 barrel production brewery. Born and raised around Erie, PA, they are excited to bring something new and dynamic to the local beer culture - Brewing Innovative Ales in Small Batches!

Lavery's is pronounced 'Lav-ry' not 'Lave ry', a soft 'a' in the middle. Similar to 'have', not 'gave' according the brewery.

We've offered you many pumpkin beers on tap and in the bottles from the popular Pumking to some other less well-known but tasty pumpkin beers.  Lavery says that folks enjoy this one because it is not too sweet or spicy.  What do you think?  What's been your favorite pumpkin beer at the Inn? Let us know when you visit the Inn next or join the conversation on Face Book.
Posted by Franklin Inn Mexican Retaurant at 10:36 AM No comments: Links to this post