A bit of a Mexican-Indian-Italian Fusion. My favorite cuisines!

The inspiration for this dish was two beautiful eggplants left from the last two weeks of my CSA box and a couple other miscellaneous unused veggies from this week's box (one red onion, two over ripe tomatoes, and a bunch of cilantro). My older children would have probably been happy with a cheesy slathered eggplant parmigiana dish but I wanted to try something different. Honestly, the gluten free baked "fried" zucchini with nutritional yeast cheese was a flop the week before. So, this dish had to be good or my family would be wary of  Mom's next adventure. It also had to be "Julia-friendly" due to my youngest daughter's multiple food allergies. I remembered making a curried cauliflower with chick peas that turned out great so I thought I'd add some of what I enjoyed about the curry recipe. This is what I ended up with. It turned out amazing, so I thought I'd share it with you. 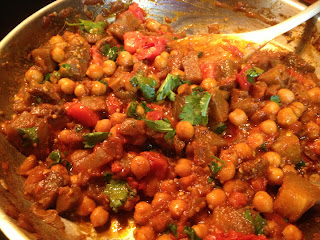 Ingredients
*  two beautiful egg plants from my CSA box (roasted, skinned and cubed)
* 1 red onion (would have happily used more)
* 1 large clove of garlic, minced plus a left over piece of roasted garlic
* 1.5 tablespoons of curry powder
* 2 tablespoons of tomato paste
* 1 can of chick peas (drained)
* tablespoon of lime juice
* couple pinches of salt
* couple shakes of crushed red pepper
* Cholula Hot Sauce (my favorite hot sauce!)
* two tablespoons of vegan margarine (so Julia could eat it. Real butter would have been good too.)
* two overripe tomatoes cubed (just because I had them)
* bunch of fresh cilantro

My on the fly procedure
My beautiful eggplants were roasted for 45 minutes at 400. While waiting for the eggplants to cool so I could handle them, I sauteed my red onion until browned in olive oil. I like onions so I would have used more but this was what I had. After reducing the heat to medium in went the garlic, curry powder, and tomato paste. I stirred it all until the onions were well coated. Next to join the party were the chick peas, a quarter cup of water, lime juice, salt, crushed black pepper, and a few dashes of cholula hot sauce.These goodies shimmered for about five minutes with an occasional stir. Then, I put in two tablespoons of Earth Balance Dairy free Soy free butter. More simmering and stirring until the butter melted (Earth Balance doesn't melt as quickly as regular butter.) I put a few more dashes of Cholula, a couple shakes of crushed red pepper, and a bunch of chopped cilantro.  I had to careful with my Grace. She doesn't enjoy spicy food like the rest of us. Yummy!!! 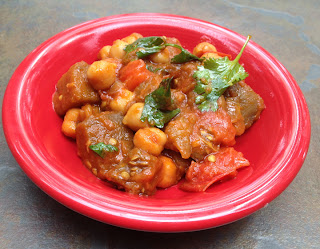 This dish is so flavorful. Even if you don't like eggplant you may want to try it. The  Eggplant could easily be traded for whatever veggies you have on hand: potatoes, zucchini, cauliflower. It would be great served over rice or quinoa or with baked shredded chicken. However, we ate it as is for lunch before we went to my best friend's birthday pool party where we gorged on hot dogs, hamburgers, potato chips and birthday cake for dinner (when in Rome).  But, hey....we had a healthy lunch anyway.  I would make this again in a heart beat (and I will with other veggies). I also suggested to John that we adapt it to accompany one of our off  menu specials at the Franklin Inn.
Posted by Franklin Inn Mexican Retaurant at 11:09 AM